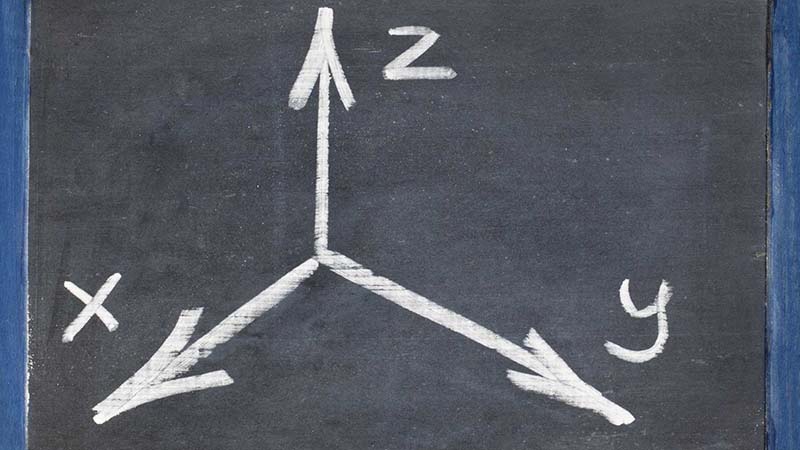 On this page, we would like to explain the three key features of tri-axis magnetic sensors.

Hall sensors and MR sensors are typical magnetic sensors. Magnetic field sources such as magnets have already been combined with sensors in applications related to movement, such as open/close switches and object movement detection. Component layout is a critical point that must be kept in mind when using magnetic sensors.

In principle, the magnetic sensors described above only detect magnetic fields coming from a specific direction. Therefore, the relationship between the  positions of the magnetic field source and the sensor, as well as how the object moves, greatly affect application performance. However, the need to make products more compact and to closely integrate components has made it difficult to optimally arrange sensor and magnetic component layouts. This has led to situations in which target specifications have not been met.

Tri-axis magnetic sensors are directionally independent, so they are capable of detecting magnetic fields coming from any direction. In other words, using a tri-axis magnetic sensor eliminates some of the constraints that apply to sensor/magnet layout and helps improve design flexibility. Similarly, analyzing the data obtained along each axis makes it possible to build systems that are highly resistant to installation positioning variations and other variations. 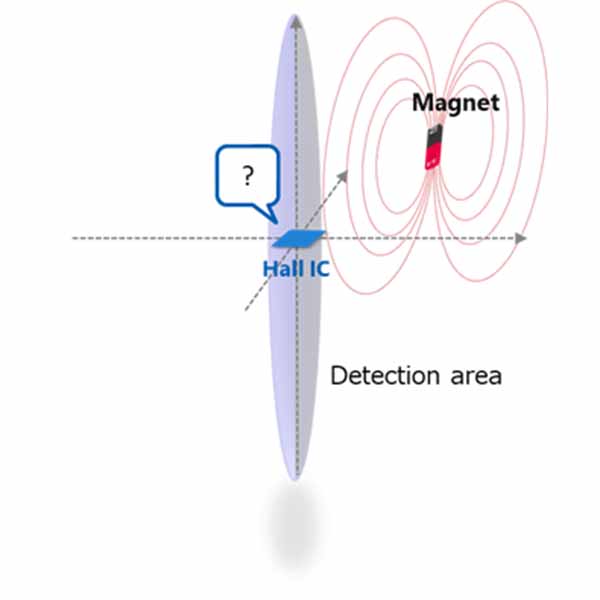 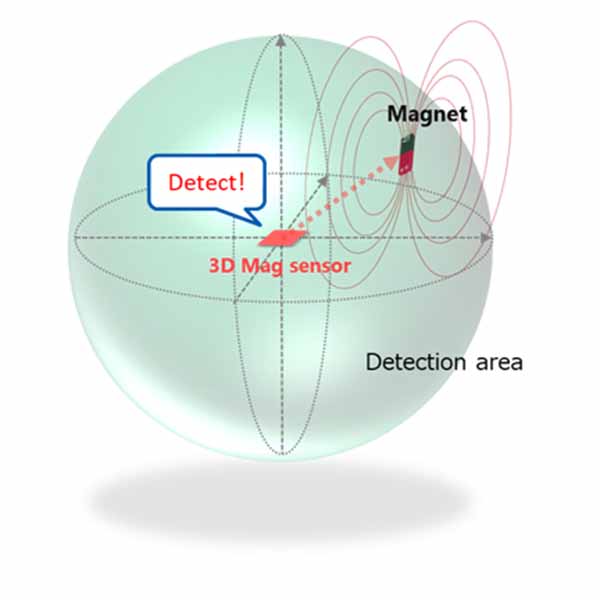 They are unable to detect complex motion because they are only sensitive along one axis (the Z-axis). As shown in the "improved layout flexibility" item, not only is the magnetic field detection area a small one, but even if an object is placed within the detection area, the linear Hall effect IC cannot detect the motion of an object whose magnetic field does not change with respect to the sensor's axis of detection, such as the rotational motion of the object. 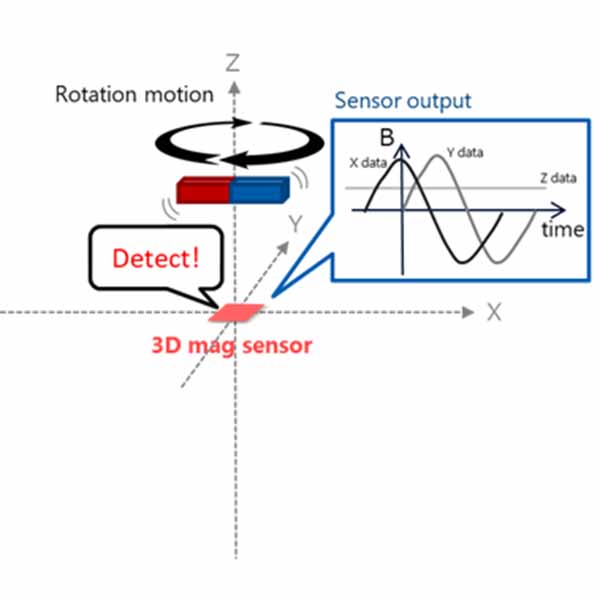 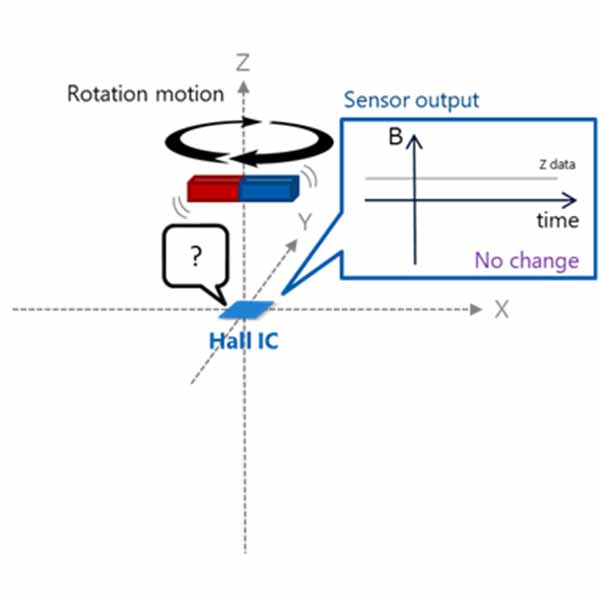 One issue that always arises when using magnetic sensors is how to deal with the adverse effects of magnetic fields that are not produced by the moving objects that are to be detected -- so-called "magnetic field disturbances."

For example, a security product that uses a Hall switch to monitor if a door is opened or closed does so by detecting if the magnetic field applied by the magnet attached to the door exceeds the Hall switch's upper and lower thresholds.

However, since the Hall switch has axial sensitivity only alone one axis, it is impossible to determine whether the applied magnetic field originates from the magnet attached to the door or if it is a magnetic field disturbance produced by another magnetic field source.

In other words, it is physically possible for a malicious actor, such as a thief, to trick the open/close sensor by bringing another magnet closer to the Hall switch and controlling the applied magnetic field.

In other words, it makes it possible to build a secure door open/close detection system that is resistant to magnetic field disturbances. 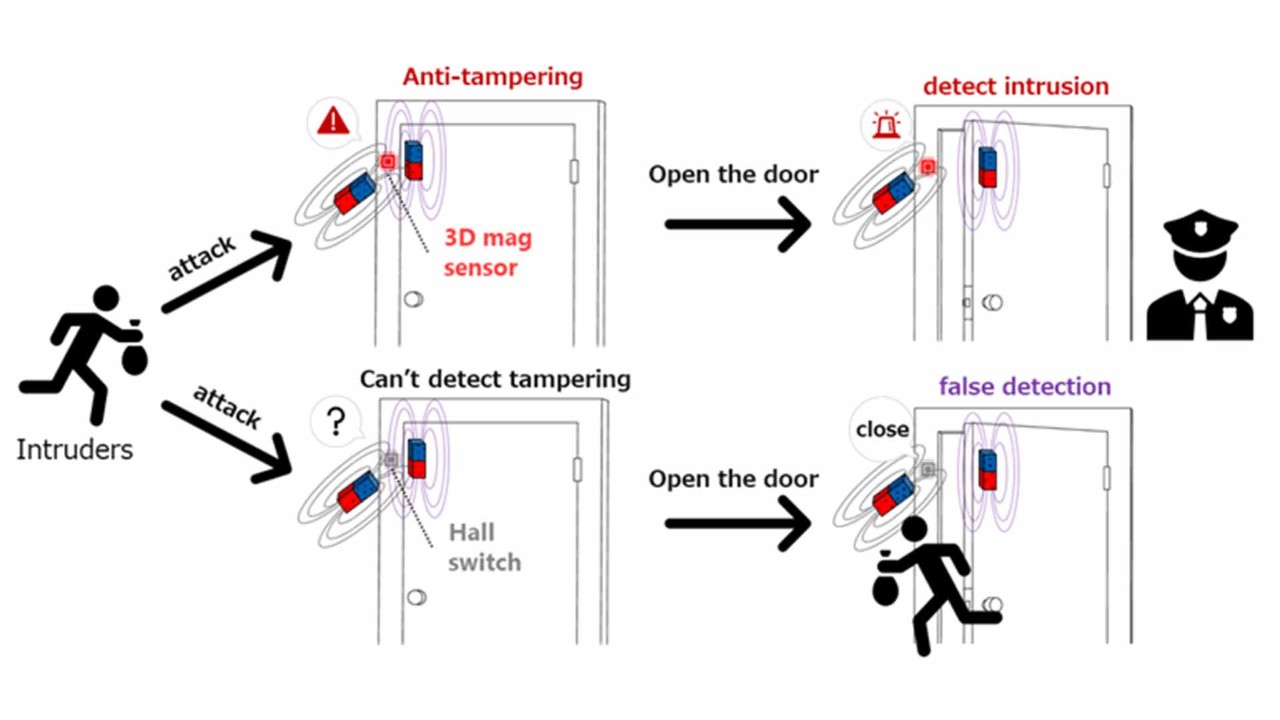 If you would like to know more about how AKM can solve problems, please click below links. 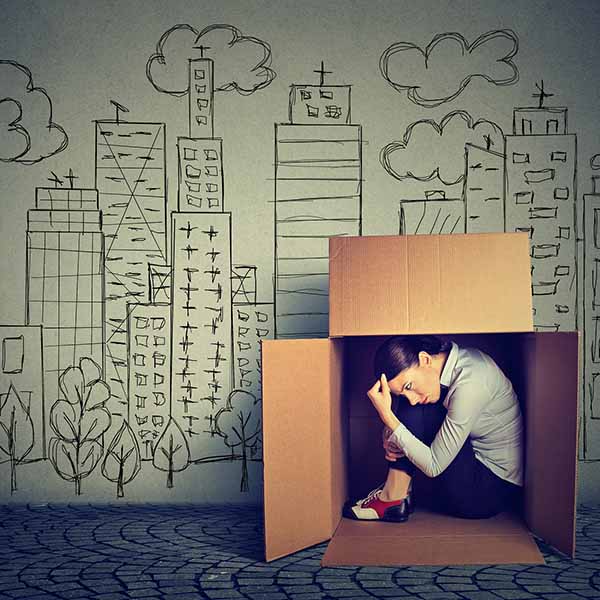 Rotation angle and stroke detection in a limited space for sensing